The Wells Fargo Museum was formed to celebrate the history of the Wells Fargo bank. Yet, such a legacy is so tightly tied to California gold that many of the displays are devoted to the shinny stuff.  While the museum occupies a small section of street in San Francisco’s Financial District, it is packed with gold nuggets, gold dust, and gold history.

Like many others drawn by the California Gold rush, Henry Wells and William G. Fargo saw gold in the west. Already successful business men in the East, they formed Wells Fargo in 1852 to offer express and banking services to California. Wells and Fargo quickly established banking locations near major gold fields accepting gold dust and nuggets. Yet, by the time they had arrived in 1852, California already had many banking and express services established. When a financial scare in 1855 lead to a run on banks—which broke most of its competition—Wells Fargo was left as the major player in California.

The Wells Fargo museum is devoted to the early days of the bank, where bank accounts were opened with gold dust and gold bars were transferred in armed stage coaches. For the uninitiated, the museum sets the scene, describing it’s original customer base: the miner. Historic mining tools are on display with explanations of the California Gold Rush.

Gold that wasn’t spent on a miner’s food, tools, and entertainment could find its way to an assayer, who would process and value the gold. The display below presented the assayer’s tools and explained how they would melt down the gold and test it.

On the main floor of the museum, there are several displays of the real draw: gold in different forms. Displays demonstrate different natural occurrences of gold, such as gold in quartz, pyrite, and other sulfides, as well as nuggets.  Alongside is a collection of gold coins and other gold worked items.

Collection of coins on display representing different forms of tender.

Gold in quartz and nugget forms on display to visually demonstrate the different forms in which gold can be discovered.

Upstairs–and our favorite display–shows samples of regional gold (see below). Compare gold mixed with quartz from the American Fork of the Sacramento River to the flake gold in the Yuba river to fine gold dust from Bear Valley.

Along side the small dishes of gold is a map of the Wells Fargo stage coach route, circling near major hubs in the gold fields. Below is a topographic map of California Gold Country highlighting locations of quartz mining, dredging, drift placer, hydraulic placer, and Wells Fargo & Co. Offices. In the close-up view of the map, well known mining towns like Nevada City, Grass Valley, and Auburn are surrounded by mines.  One can also see how a stage coach stop such as that at Marysville is conveniently down river from Nevada City and the mines surrounding it. 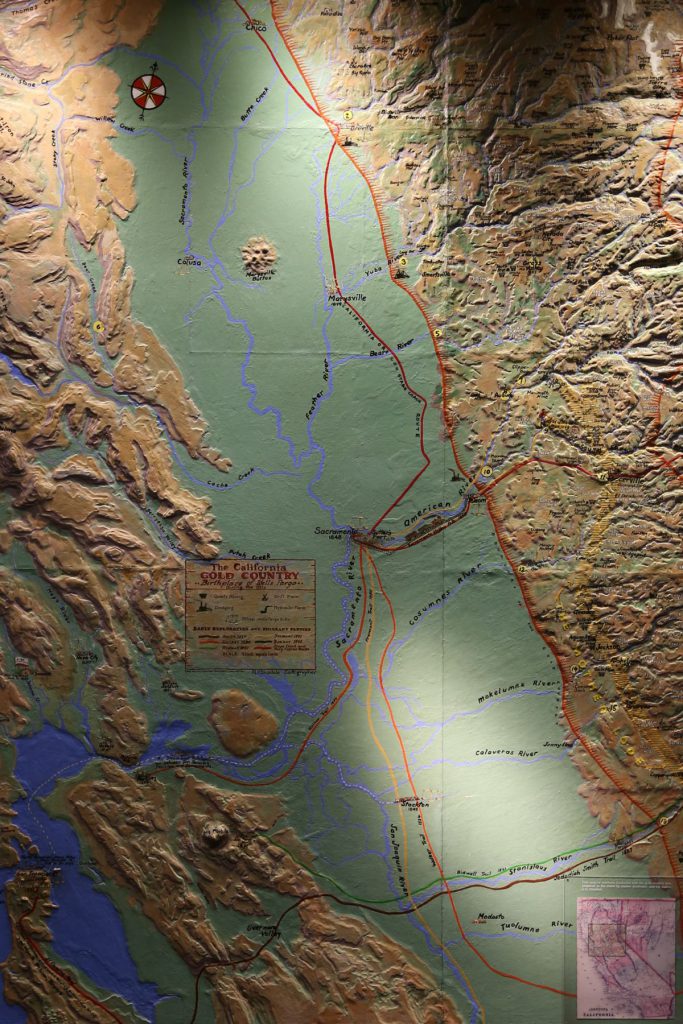 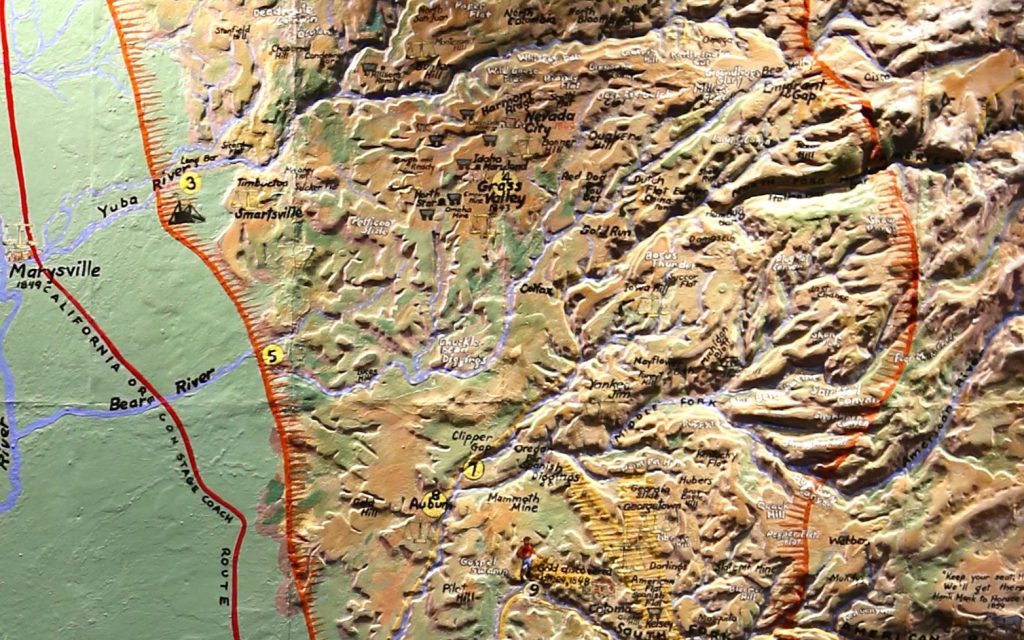 Mining Claims Near The Museum