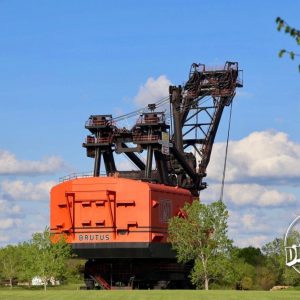 Big Brutus lives up to its name. The massive Bucyrus-Erie model 1850-B electric shovel is so large it was abandoned at the location of its final use. Indeed, it was the second largest of its kind in the 1960s and 1970s and the largest shovel still in existence—16 stories tall with a 150-foot long boom and weighing in at 11 million pounds. The dipper can fill three railroad cars with its 90-cubic-yard capacity. It is less of a surprise that the shovel was abandoned, despite the $6.2 million price tag back in 1962, when one learns that it can only move at .22 MPH.